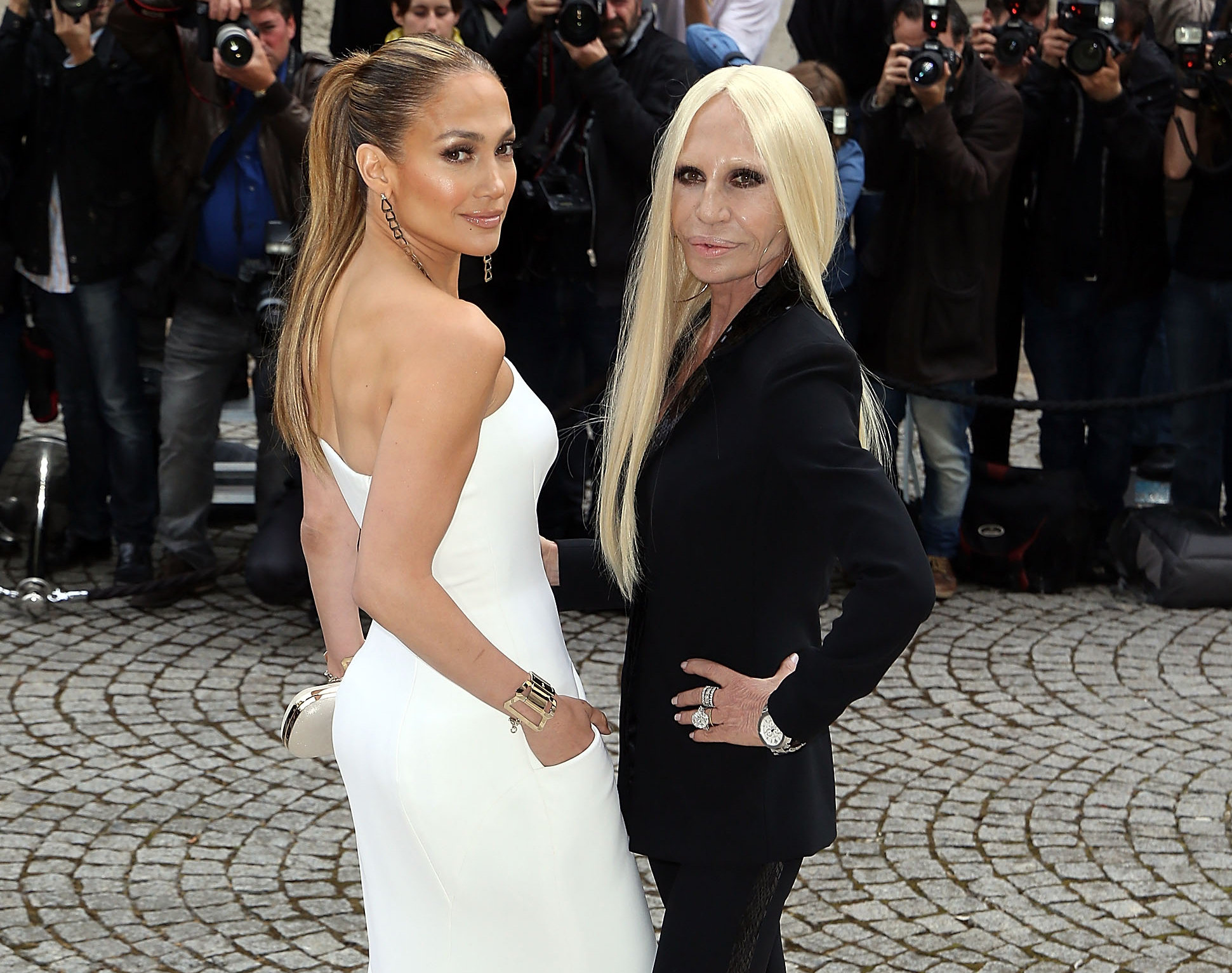 Not for Donatella Versace, the feminine floor-sweepers that are floating up and down Milanese runways this week. “Rigor with sensuality”—that was her focus for Spring. And the focus was absolute: A handful of elements combined to create a statement that was limited but strong. The models’ hair cued a new strictness. Gone the supermodel mane, to be replaced by a tight topknot wrapped by Guido Palau and his team in PVC. Pat McGrath’s makeup emphasized a strong brow at the expense of other features.

The look had a my-way-or-the-highway fierceness, but it was subtly realized. There was a kind of fetishistic tug to an outfit like the blue apron dress with the harness back; you felt it, too, in the severe silhouette, whose focus was alternately a pencil skirt that ended just below the knee or a fitted mid-thigh length. This looked best in a trim coat-dress, which came in white piqué or black leather for maximum all-styles-served-here effect. As Donatella pointed out, the longer skirt could be paired with a midriff-baring tank or a top scissored into an asymmetric racerback—not somaîtresse after all. The cutouts were carried over to the footwear. The athleticism in such detailing gave the collection an energetic charge.

The strong, clear colors played a role, as well—Mediterranean blue, orange, shades of red, combined in a strong, summery stripe. Donatella also revived the Greek key, the decorative border that is a classic Versace code. It was traced in vinyl on a white jacket or combined with the stripes in a collage-y print on a sundress. All of this was played against a white that was as stark as the houses on a sun-bleached Greek island.

Donatella extended that slightly classical notion into cocktail and evening dresses, adding fringe for movement, then weaving and draping it so it looked like something plucked from a Parthenon frieze. The goddess dress has been a house specialty from the beginning, so here it seemed like a perfectly logical conclusion for a Versace collection that drew its strength from the label’s roots. 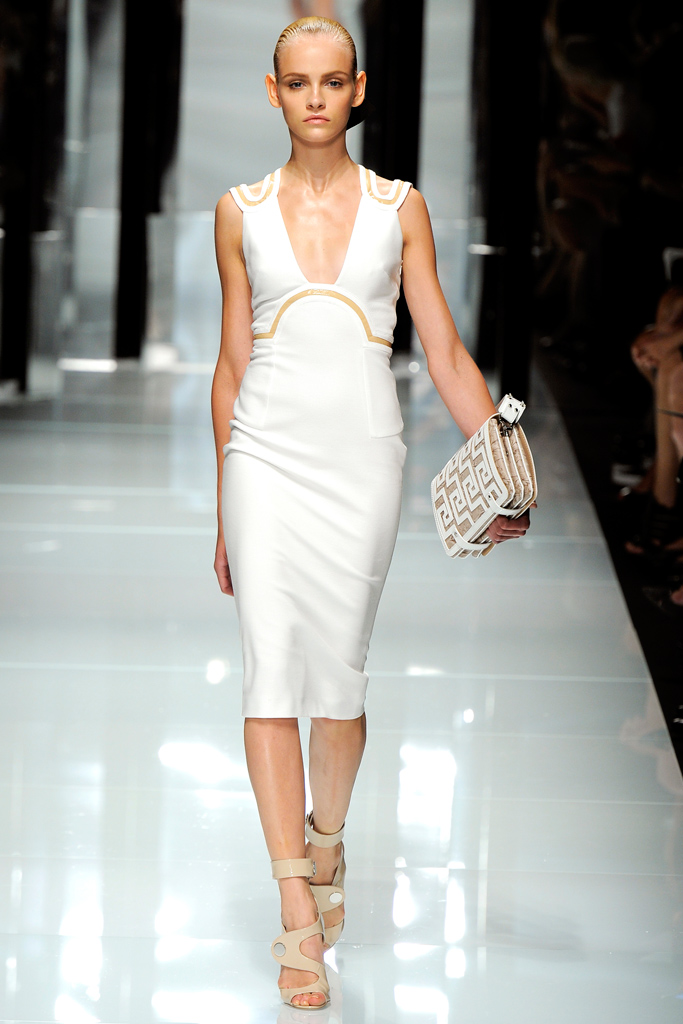 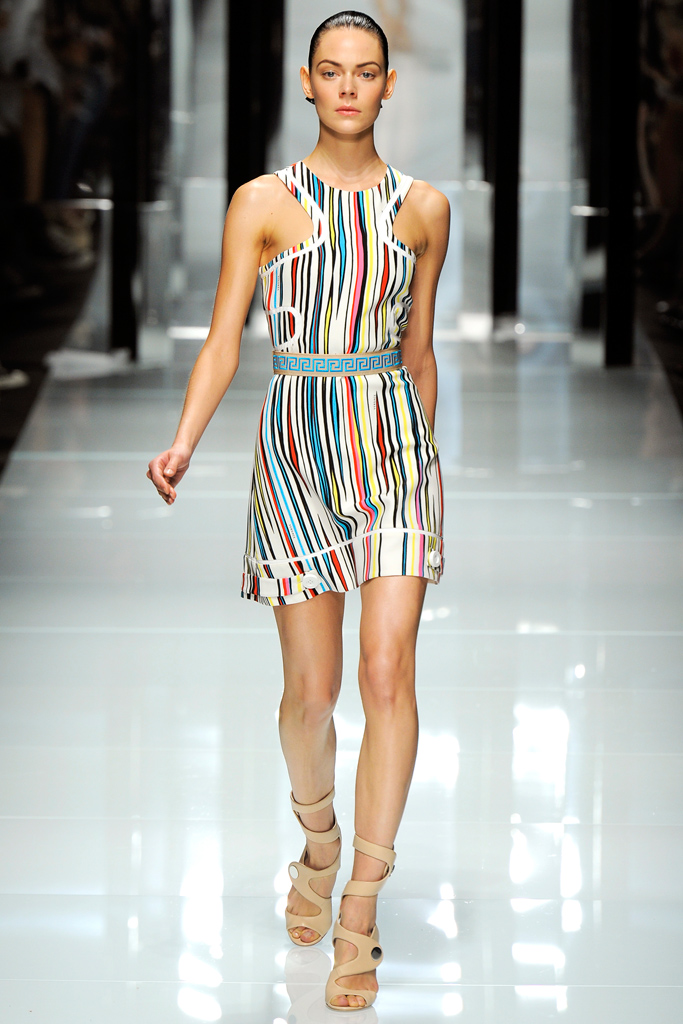 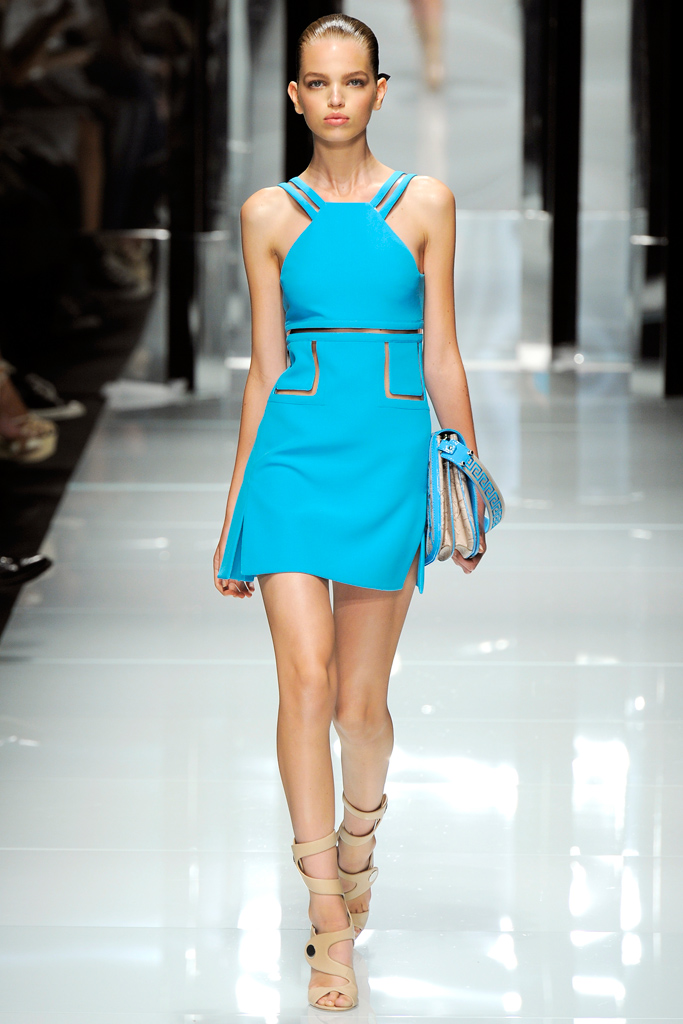 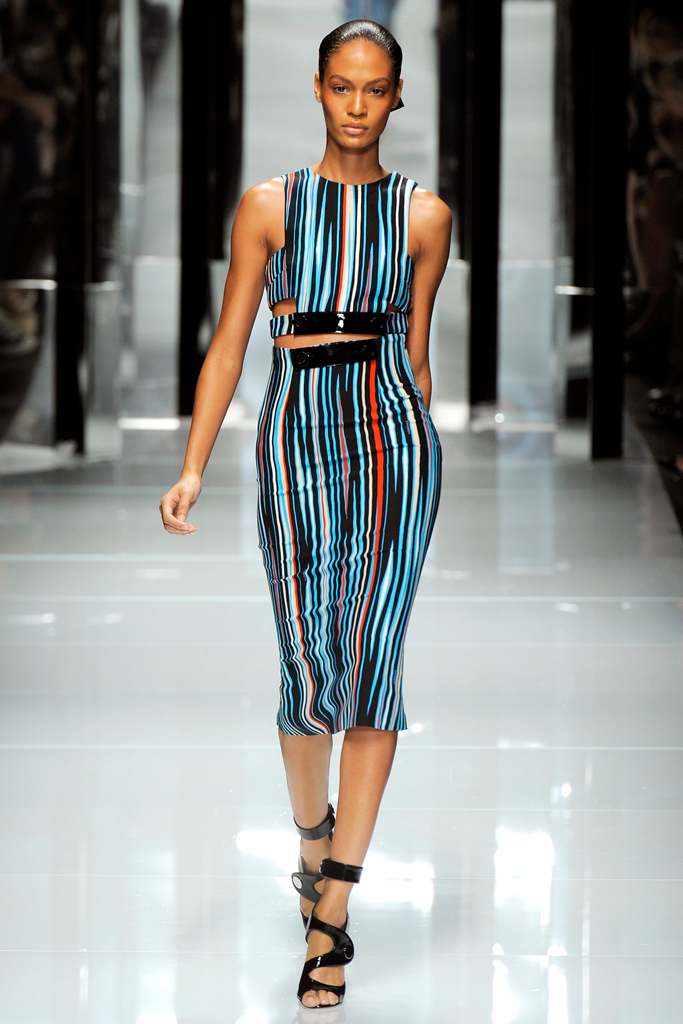 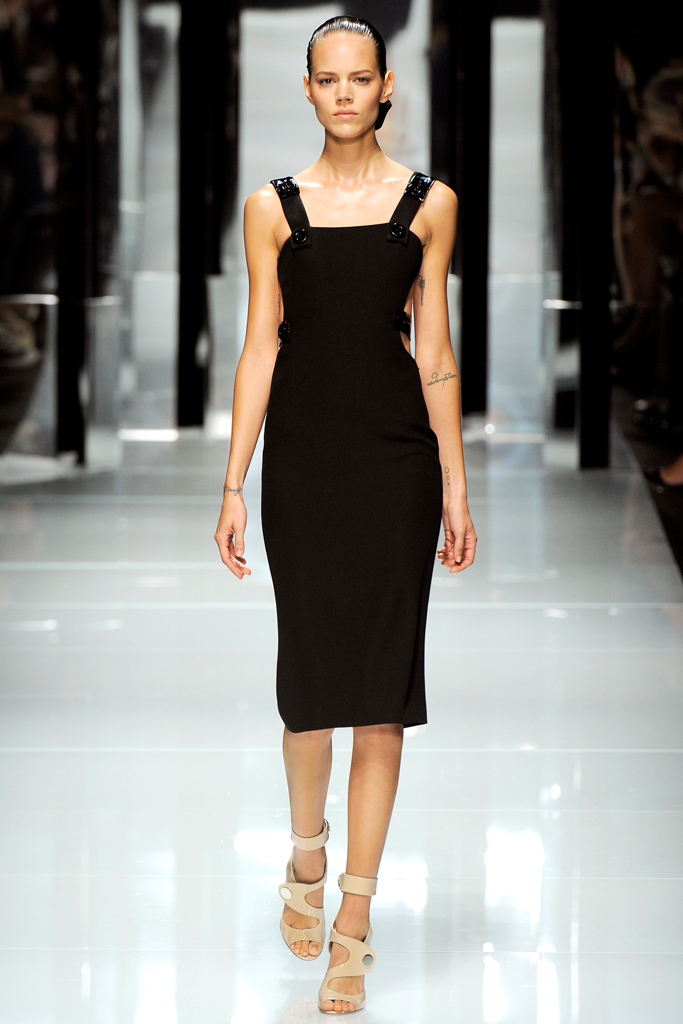 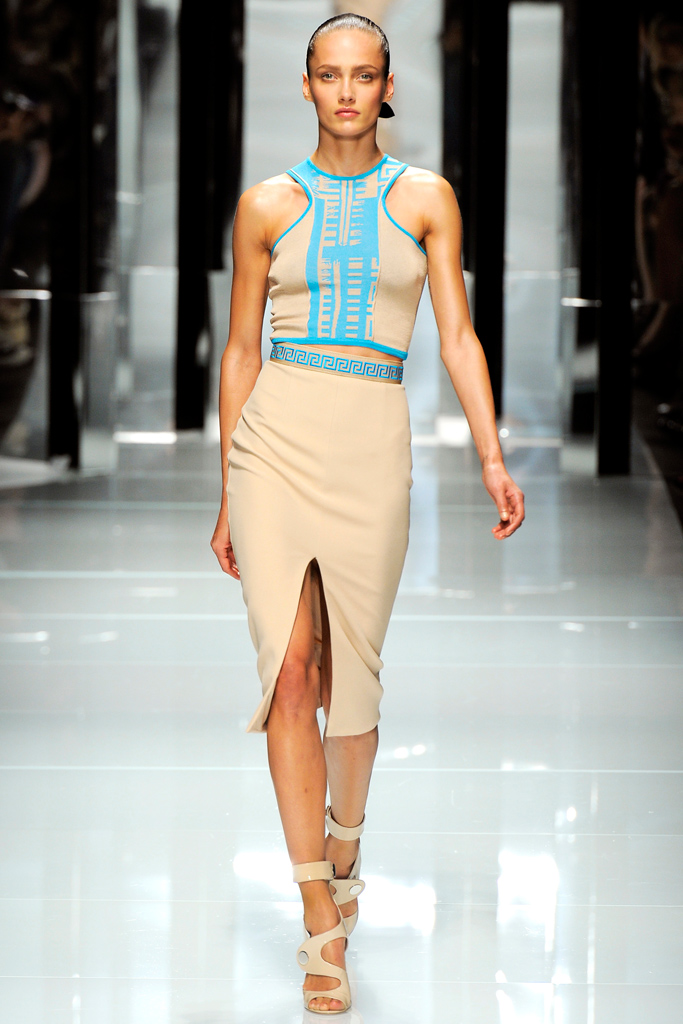 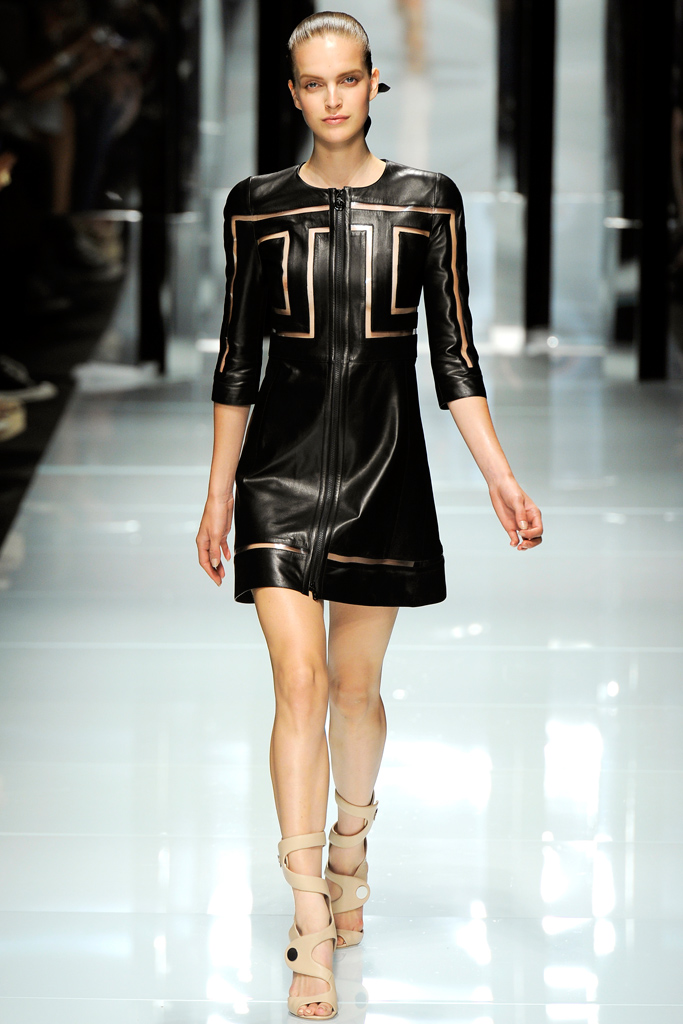 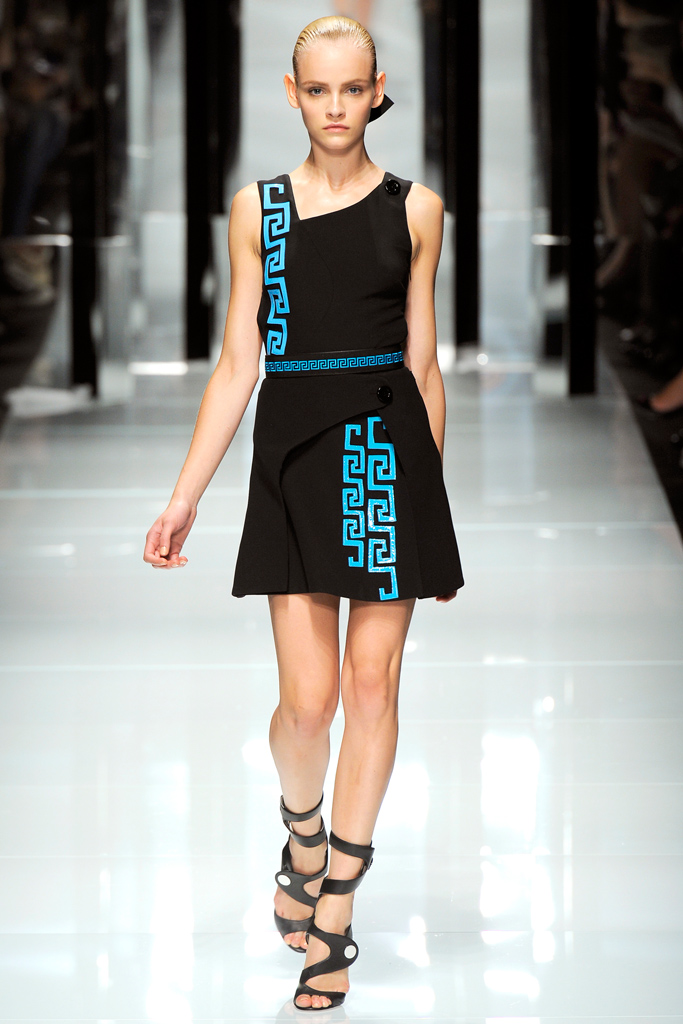 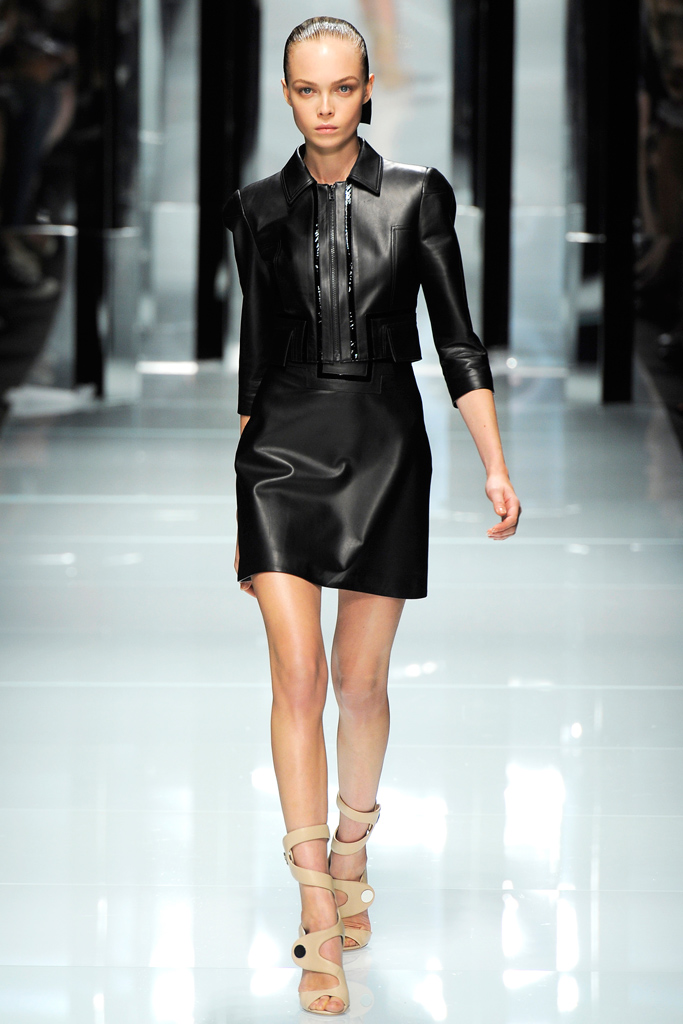 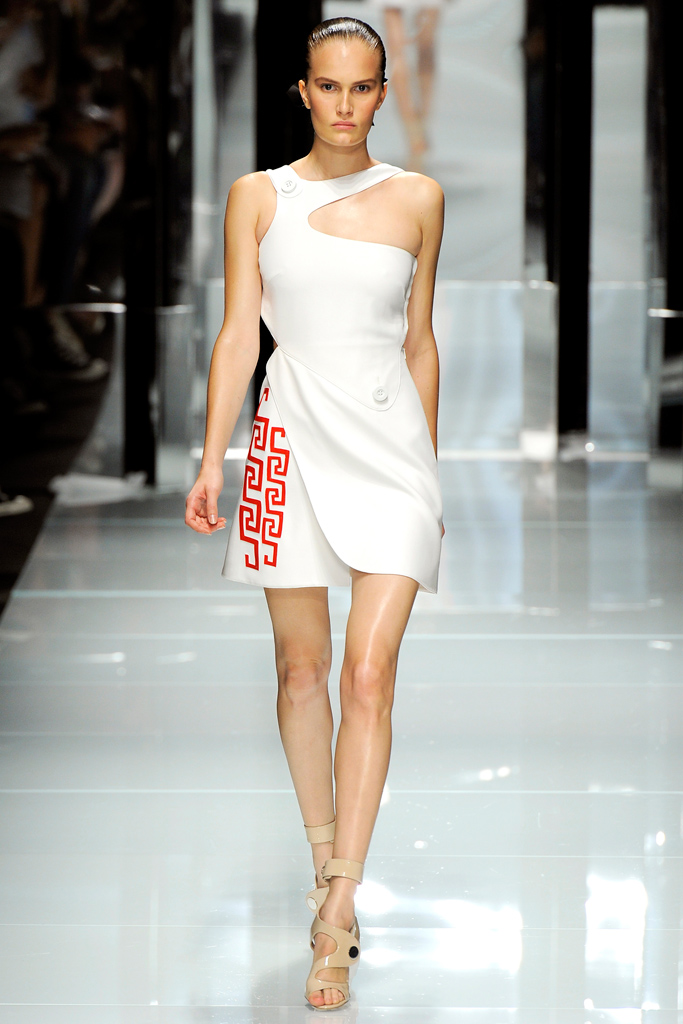 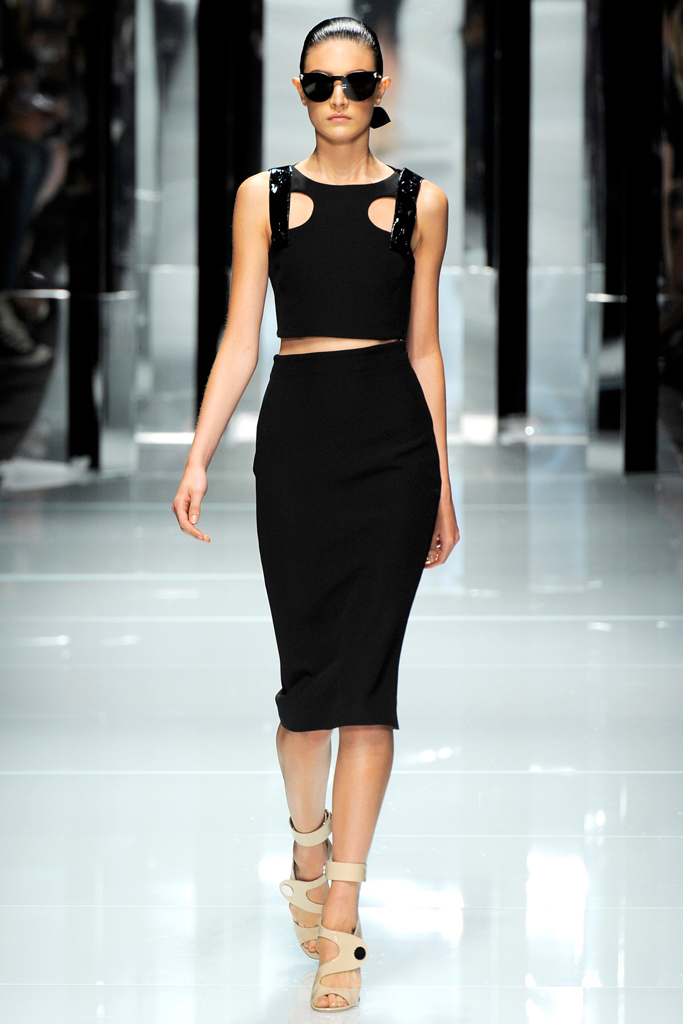 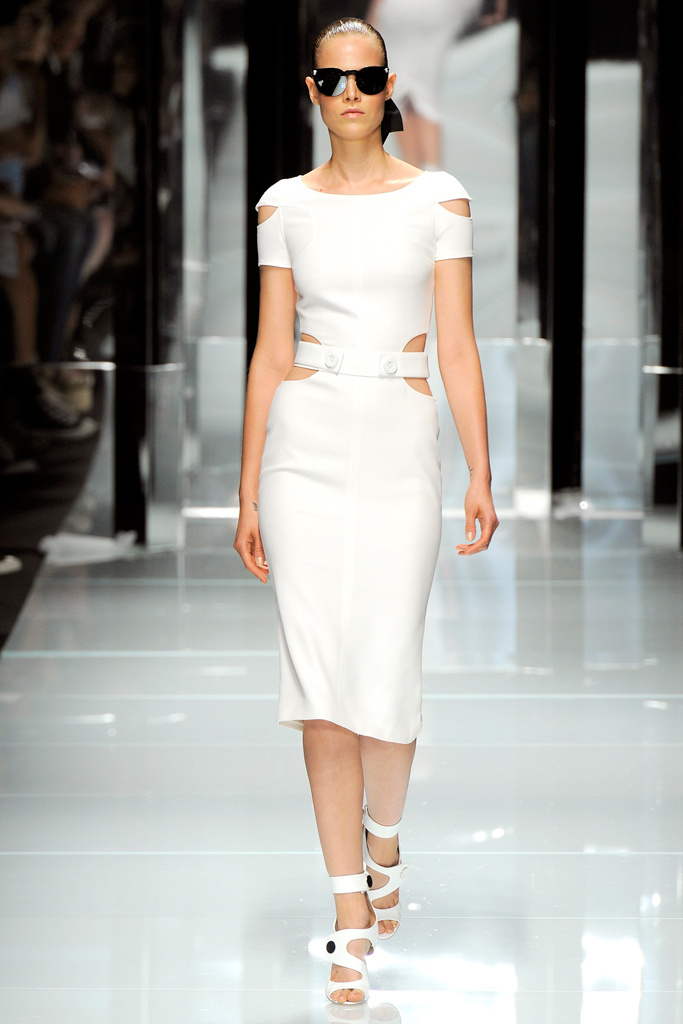 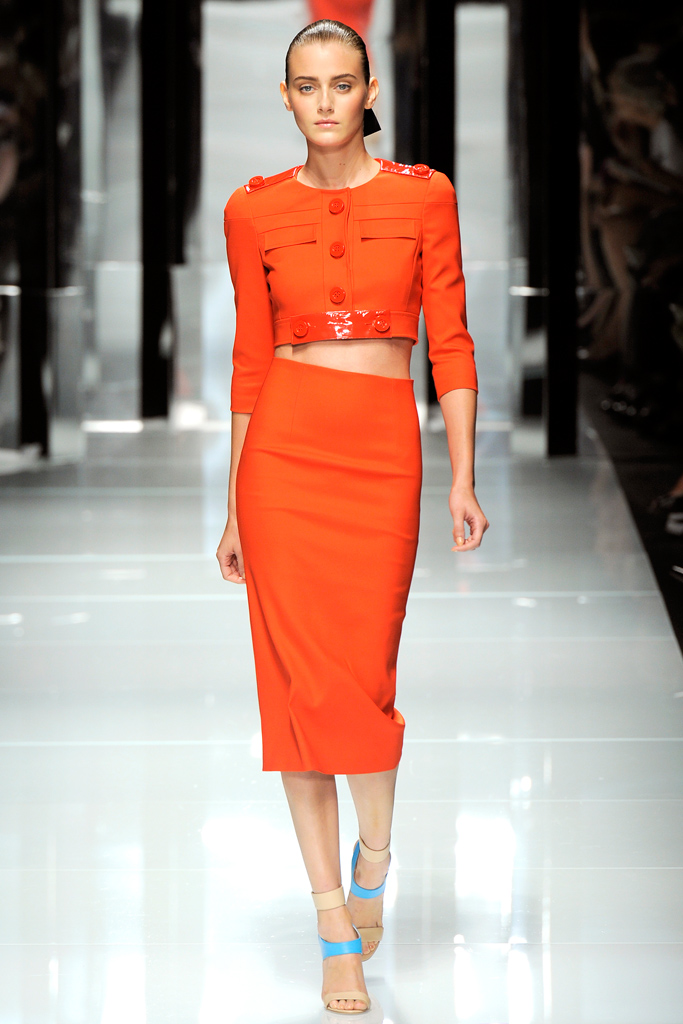 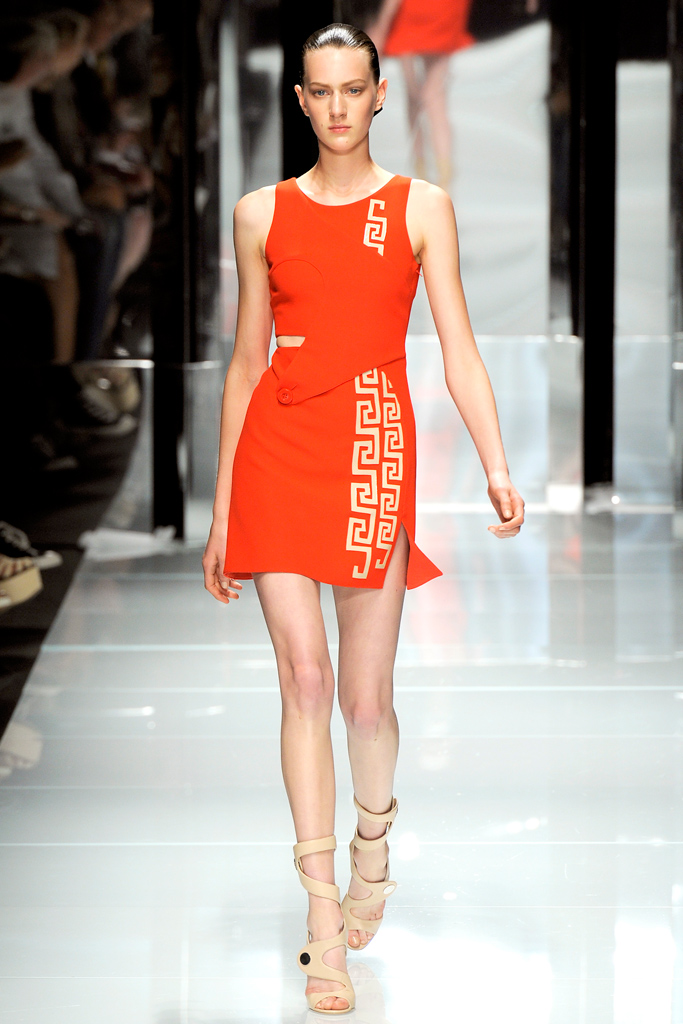 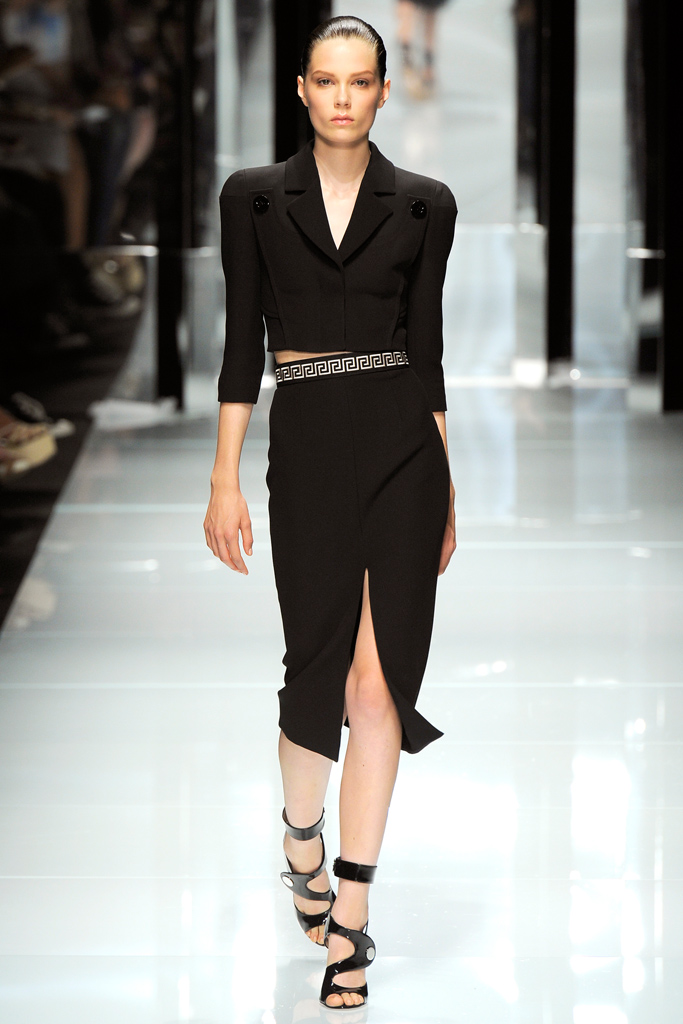 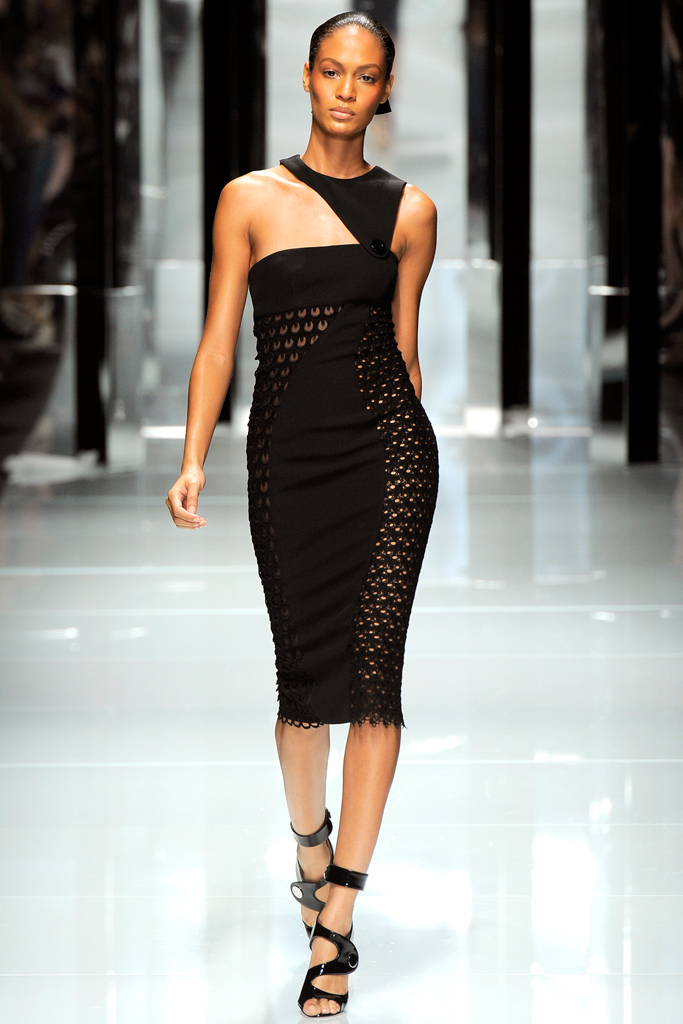 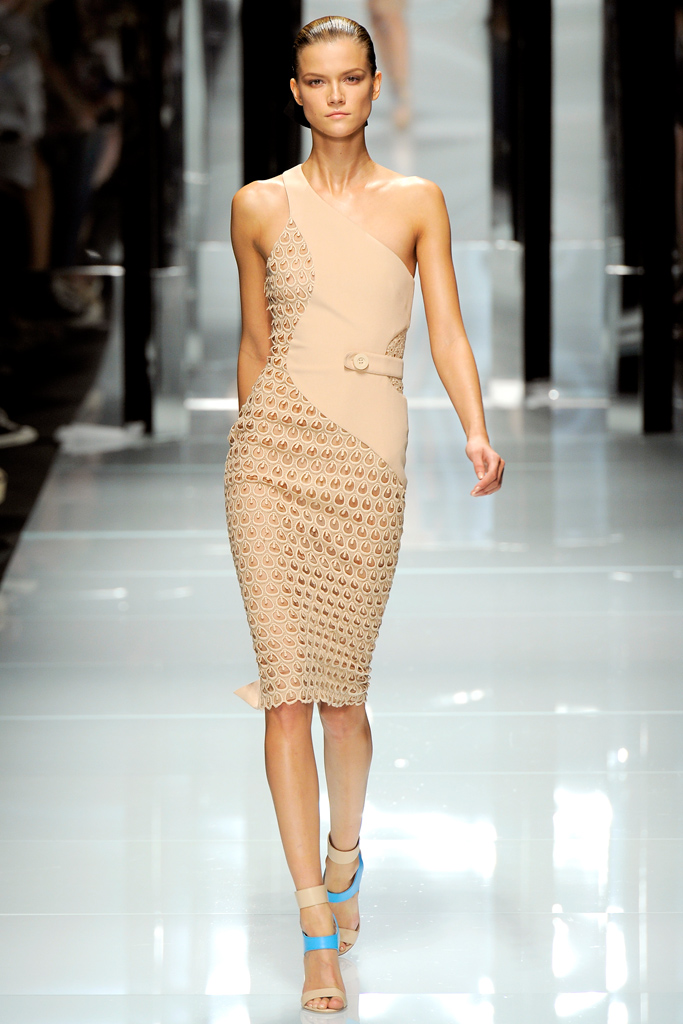 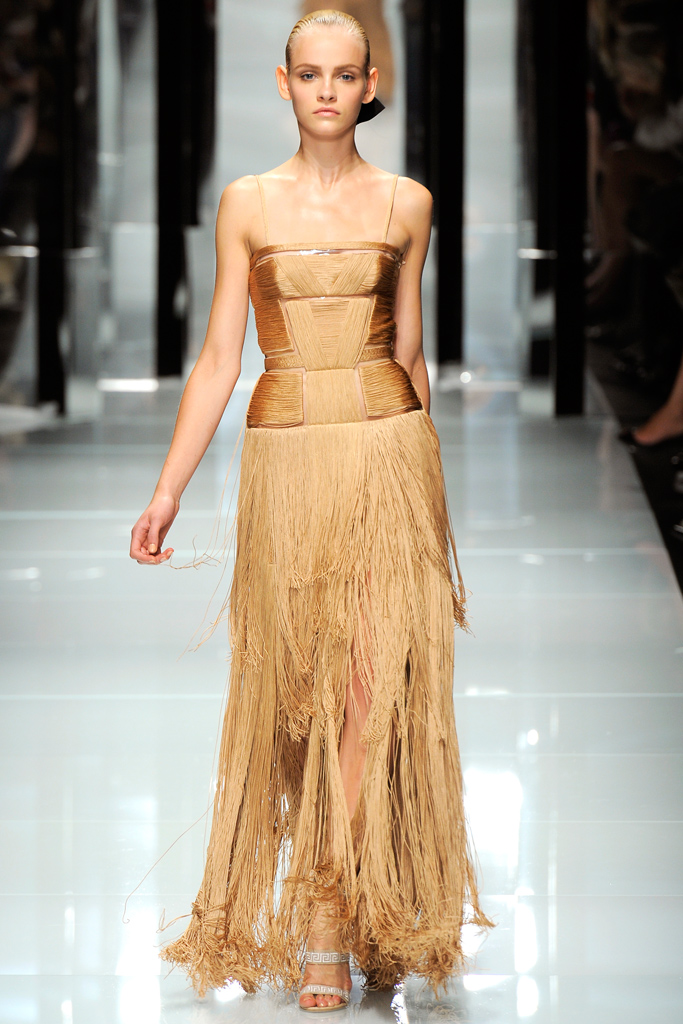 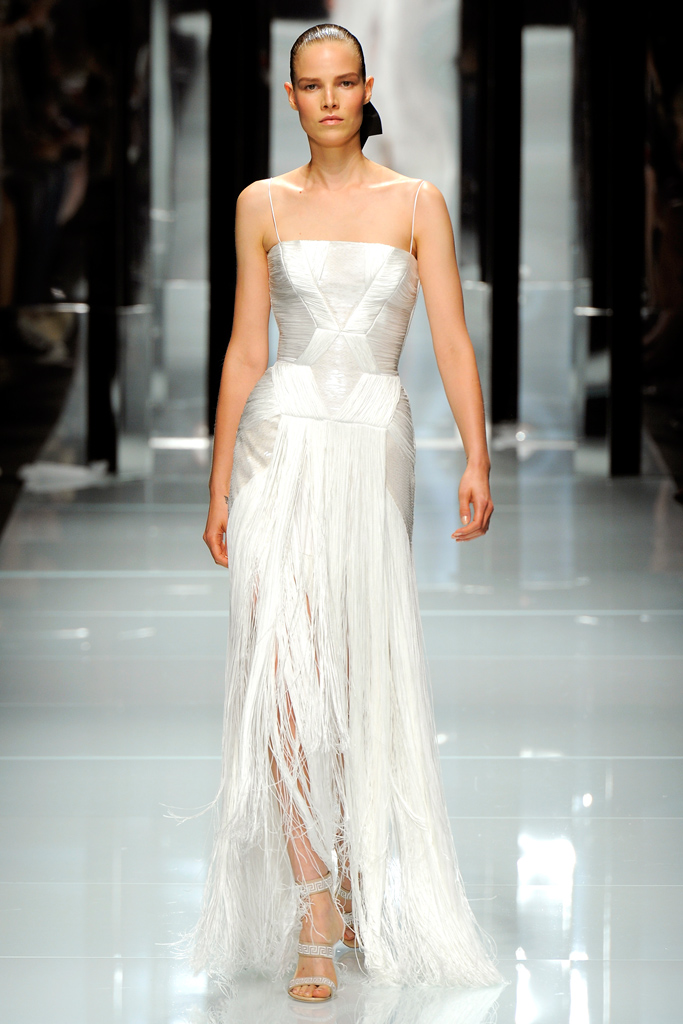