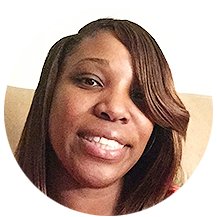 Aesha Ryans has been a member of Divine Trinity Temple since December of 2001 and has, since then,  rededicated her life to God in 2007.  She then went on to work in the department of nurses guile and mistress of ceremony during Sunday morning worship services.   Now as of January 2013, Aesha has served as The Church’s Secretary as well as her Pastor’s Personal Secretary, Treasurer and Greeter.  She is married to Edward Ryans and has a daughter, Miesha Jones that is attending her alma mater, Kent State University in the fall of 2015.  Aesha is an graduate from Warren G. Harding High School and earned her Bachelor’s Degree in Business Administration- Finance in 2007.  She has over 12 years experience working in the banking industry.  During Aesha’s spare time she enjoys spending time with her loved ones, exercise, shopping and traveling.